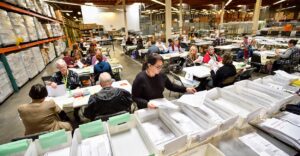 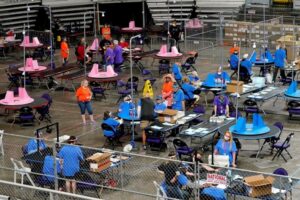 Dominion, Maricopa County Rebuff Arizona Senate’s Attempt to Get Election Machine Passwords Auditors found an entire database from a machine deleted, raising concerns BY ZACHARY STIEBER – May 14, 2021  Dominion Voting Systems and Maricopa County officials are refusing to hand over passwords for election machines to auditors in Arizona. Dominion said in a statement to news… 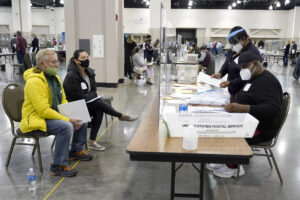 Government Colluded With Big Tech On Election Censorship By Mike Huckabee – April 30, 2021 While we wait for the results of the Maricopa County election audit, there’s more being revealed about how the 2020 presidential election was conducted that should concern us all. This story relates to the hair-splitting some do when it comes… 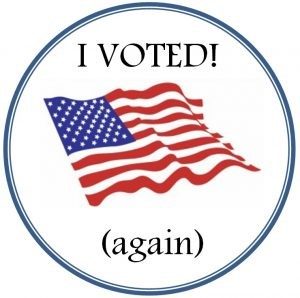 Voter Suppression for Some

Democrat States: “Voter Suppression” for Me, but Not for Thee  By AZ Free Enterprise Club – 4/13/2021 It is now very obvious that the left and liberal media’s commitment to false and hyperbolic rhetoric regarding election bills in Arizona, Georgia, Texas, and elsewhere is not about policy but rather demonizing Republicans. But the jig is… 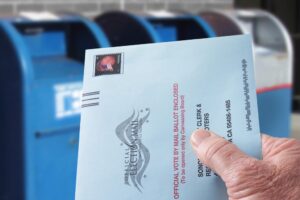 Judge Orders New Election After Discovering Unsettling Truth About Majority of Absentee Ballots By Elizabeth Stauffer – March 4, 2021 A Mississippi judge has ordered a new runoff election to be held for the alderman seat in Aberdeen’s Ward 1. Special Judge Jeff Weill cited “evidence of fraud and criminal activity in how absentee ballots were…

At today’s informational hearing, auditors working for the Arizona State Senate presented no evidence of widespread fraud in Maricopa County’s 2020 presidential election results, however, there was considerable evidence of incompetence, sloppiness, and irregularities in the election itself.

During the hearing, Senators Karen Fann and Warren Petersen received an update on the Senate’s audit of the Maricopa County election from former Secretary of State Ken Bennett, Doug Logan of Cyber Ninjas, and cyber security expert, Ben Cotton, of CyFIR.

The auditors made several shocking allegations during the hearing, among them that:
• Over 74,000 more ballots were received and counted than were mailed out
• Auditors discovered thousands of duplicate ballots without serial numbers in ballot boxes
• 3,981 voters were registered to vote in violation of an Arizona Supreme Court ruling issued prior to the election
• 11,326 people voted who were NOT on rolls on Nov 7 but were on December 4
• Based on system forensics, there is no way Maricopa County could certify the election to be safe
• Maricopa County was supposed to use “votesecure” paper that should not bleed through, however, the ballots show there was bleed through which could cancel the ballots

It is believed that many of those 74,000 ballots are ballots voted by voters who are registered to vote-by-mail, but chose instead to vote in person at voting centers prior to October 23, 2020. According to various sources, the total amount does not account for all those types of voters, however, leaving a discrepancy and raising serious concerns.

The County offered no explanation for the disarray of the election materials as described by Bennett. Instead, Maricopa County Board of Supervisors Chair Jack Sellers, who himself narrowly won his seat in the 2020 general election, issued a statement in a tweet simply attacking the auditors and ignoring their claims:

As for Maricopa County’s claim that the election data was safe, the auditors reported they lacked the requisite access to assure voters that the system was not hacked and the data was indeed safe. In fact, Cotton explained the problems with the County’s claim that its system is not vulnerable and accessible. He pointed to the hack of the voter registration public facing portion of the system earlier in November as evidence that there was an opportunity to breach the system.

“If for example the registration server was acting as a jump box, and that it was public facing and private facing; if someone accessed that system they would have no difficulty at all effectively penetrating and setting system level access,” explained Cotton.
Cotton noted that the system had not had security updates since March of 2019, and without those updates, would be fairly easy to breach.

Before receiving their audit team’s testimony, Fann made it clear once again that the audit is not being conducted on behalf of former President Donald Trump, or to overturn the 2020 election results.

“I would like to interject something at this time, just for the record, because we know there’s been some misinformation out there and we have said from day one, and I am glad to see some of my other senators here because it is our entire Republican Senate body that wanted to pursue this from the very beginning The important thing that we wanted everyone to know is that this is not about Trump. This is not about overturning the election. This has never been about anything other than election integrity,” said Fann. “This is the epitome of what America stands for and if we do not have faith and confidence in our electoral process then everything we do in life is jeopardized. There was a poll that was recently done showing that about 45 percent of people in Arizona believe that we have serious problems with our elections. Whether that is true, or not, either way there are rumors, or accusations, or legitimate problems for whatever reason, and as a Senate body we felt it was our obligation and our duty to answer those questions and either confirm what they were afraid of or that we proved those things were not true so that they can go back to the polls and vote with confidence knowing that their ballot is sacred.”

“If we – you as auditors find anything of whether we can pass laws that would help ensure that we have more integrity and future if our procedures perhaps are lacking in some way this is a great opportunity for us to say let’s fix that because that’s what the Senate body does. We pass laws. We have accomplished this because the constitution gave us the right to subpoena information for the purpose of passing laws and with that information gives us the tools to be able to either tweak existing legislation or create new legislation to make sure that the sanctity is always there,” concluded Fann.