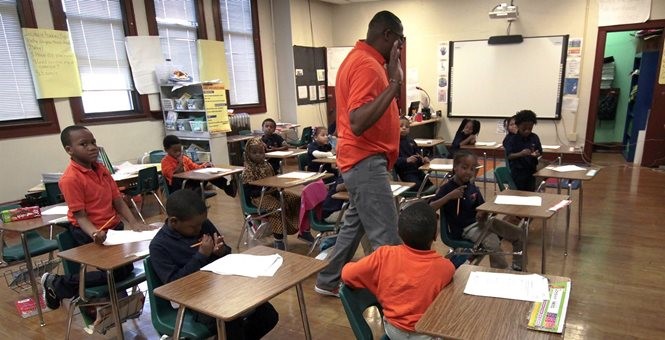 The 4,978 Schools That Changed America

Inside the small white clapboard Cairo School in Sumner County, Tenn., brothers Frank and Charles Brinkley stand under the watchful gaze of a once towering figure in American business. The portrait of Julius Rosenwald, who led Sears, Roebuck & Company for almost three decades at the start of the 20th century, has hung in the schoolhouse since it opened in 1923.

The building, now a community center, is a surviving testament of one of the most dramatic and effective philanthropic initiatives the U.S. has ever seen. From 1912 to 1937, a collaboration between Rosenwald and Booker T. Washington of the Tuskegee Institute built 4,978 schools for Black children across 15 Southern and border states.

Today, at a moment when America seems torn along racial and regional lines, when debates around opportunity, infrastructure and the American Dream ripple across the country, the remarkable success of the Rosenwald-Washington partnership is a reminder that people from divergent experiences can come together to effect real and lasting change.

The Brinkleys bear witness to the multigenerational impact of this program. The brothers attended the one-teacher school in the late 1940s and early 1950s. They went on to college and graduate school, and both became educators. They have four sisters, each of whom also attended the Cairo School and college; the siblings’10 children all went to college. Without this schoolhouse, that legacy may not have happened.

Born to Jewish immigrants, Julius Rosenwald led Sears from 1908 until his death in 1932. He helped turn the company into the world’s largest retailer, and he became one of the earliest and greatest philanthropists in American history. Booker T. Washington, born into slavery, became an educator and was the founding principal of the Tuskegee Institute.

Rosenwald and Washington met in 1911. At that time, Black public schools in the South were usually in terrible facilities, with outdated materials and a fraction of the funding provided for educating white children. Many communities did not even have schools for Black students. The two men, forging one of the earliest collaborations between Jews and African–Americans, brought together Black communities and white school boards to create this transformative program.

I first learned about this partnership from a preservationist in early 2015 and was shocked that I had never heard of it. I am a fifth-generation Jewish Georgian and civic activist. The pillars of this story are the pillars of my life. I set out to document it with black-and-white photographs that paid homage to the program’s history.

Of the original 4,978 Rosenwald schools, about 500 survive. Over three and a half years, I drove 25,000 miles across all 15 program states and photographed 105 schools. The photographs include interiors and exteriors, schools restored and yet-to-be restored, and portraits of people with compelling connections to these structures.

The Rosenwald schools program was a watershed moment in the history of philanthropy, and not only because of its mission, scope and impact. It was also an early example of challenge grants, public-private partnership and a benefactor mandating that all funds be expended within a set period after his death.

Perhaps the most enduring legacy of these schools was their graduates, many of whom went on to become foot soldiers in the civil rights movement. Medgar Evers, Maya Angelou and John Lewis attended Rosenwald schools. As the late Rep. Lewis wrote of his experience: “I was curious. I was hungry to learn. I was absolutely committed to giving my all in the classroom. My parents would describe education in almost mythical terms, that it offered the keys to the kingdom of America, the keys to a better life and to opportunity so long denied our race.”

Julius Rosenwald and Booker T. Washington reached across divides of race, religion and region and together created a pathway for a generation of children who might not otherwise have had one. In the process, they changed the country they loved.

Mr. Feiler is the photographer and author of “A Better Life for Their Children: Julius Rosenwald, Booker T. Washington, and the 4,978 Schools that Changed America,”published by the University of Georgia Press. An exhibition of these photographs opens May 22 at the National Center for Civil and Human Rights in Atlanta.■